What tea is to the UK, coffee is to Finland. Earlier this year, Finns were named the top coffee consumers in the world by the International Coffee Organisation – they drink an impressive 12kg per person per year, compared to the UK’s 2.8kg and Italy’s 5.8kg. That’s roughly 10 cups of coffee a day, usually served hot and dark and frequently paired with a korvapuusti – a traditional Finnish cinnamon roll whose name translates as ‘slapped ears’.

Such a steady consumption of coffee requires built-in coffee breaks and a constant stream of people offering each other drinks. “Visiting friends and relatives usually involves several cups of coffee,” says Samuli Ronkanen, who owns Helsinki’s Good Life Coffee (motto: avoid bad life). “It’s impolite not to drink the offered coffee and pastries. It doesn’t matter how much coffee you had before.”

That works well for Ronkanen, whose beans are sold all over the city and whose coffee shop in the Kallio neighborhood is generally packed with people drinking carefully brewed pour-overs, perfect lattes, and sugar-dusted almond croissants. “It’s so dark and cold most of the year we need something to keep us going and warm,” he explains, trying to justify the massive caffeine intake. Benjamin Andberg, who runs Helsinki Kahvipaahtimo  (Helsinki Coffee Roaster) is more prosaic. “Finns love coffee so much because you can’t drink alcohol all the time,” he says. 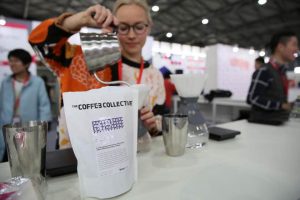 “We drink coffee every chance we get as it’s always available,” says Mikaela Gervard, who won Finland’s Brewers Cup competition in 2015 and 2016, coming in second place in the 2016 World Championships. She also notes that coffee drinking in Finland is somewhat legally mandated: “By law, we take a ‘coffee break’ at work twice daily for 10 minutes.”

Until recently, though, there was no guarantee that those 10 cups of coffee Finns were drinking each day were any good. “Finland is famous for drinking the most coffee per capita but not famous for drinking quality coffee,” says Svante Hampf, who owns Kaffa Roastery in Helsinki. While he was in school, he wanted to find a good coffeeshop to work in, but he never liked the drinks on offer. “We weren’t able to find [good] coffee anywhere in Finland,” he explains. “So, we started to roast for ourselves.”

Now, Hampf, Ronkanen and Andberg are part of a steadfast group of entrepreneurs and coffee-fuelled visionaries working to improve Helsinki’s coffee, one cup at a time – and helping along a culinary renaissance in the city at the same time. “How can that not be a good place to run a coffee company [when we drink the most in the world]?” asks Andberg. All three companies focus on ethics, sustainability, and, of course, quality, which are three traits that many Finns have come to expect from their coffee, as well as their food. “The whole food scene is evolving fast in Helsinki,” says Hampf. “It is a great place to run a coffee company, especially when we are focused on something new and exciting.” Culinarily, Finland is on track to catch up to – and perhaps surpass – its Nordic neighbours, embracing local, sustainable, and unusual ingredients (reindeer and its vegetarian counterpart Veef, for instance) in a movement spearheaded by young tastemakers. 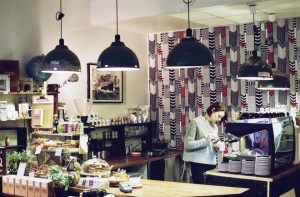 So-called third-wave coffee shops – those that measure ground coffee beans on scales and use digital timers as they practise their craft – are popping up everywhere in Helsinki. To name a few, there’s Kuuma, the chic white-walled café in the Design District, the summer-only Ihana Kahvila, built in a shipping container by the sea, and the sleek Maja Coffee Roastery near the Alvar Aalto Museum (and, of course, don’t overlook Good Life). It’s part of an innovative culinary scene that is locally-driven, increasingly plant-based, and dazzlingly boundary-pushing. (If you need convincing that coffee can be innovative, try one of Date & Kale’s oat milk-based cacao butter-infused espressos.)

However, coffee has been a part of Finnish culture longer than Finland, which is marking its 100th year of independence in 2017, has been a country. “Finns generally look for solid, sustainable and trustworthy brands,” says Hampf. “It’s not about being flashy in the long run; it’s about being trustworthy.” While younger companies are working to burnish their coffee credentials, a few have solidified their reputations already: Karl Fazer, the 1891 café and confectionary that makes Salmiakki – the beloved or reviled salted liquorice – now serves a good cup. Ekberg, Finland’s oldest patisserie, has been serving coffee and pastries since 1852 – but these days, they brew organic, sustainably-grown Arabica beans, which pair well with the Champagne Cork pastries they’ve been making for more than 150 years.

While third-wave coffee is all the rage right now, Finnish roasters are looking at the long game, too, hoping to make a permanent improvement to Finns’ voracious coffee-drinking habits. “Whatever happens in the next 10 years, no one knows,” says Hampf. “But we will still be here, roasting the best beans we can find.”