Finland’s oldest city and former capital is well worth a visit, with buzzing bars, restaurants and museums, plus 20,000 islets to explore.

Quiz question: which is the oldest city in Finland and became the capital in 1809? No, not Helsinki – Turku. This south-western city, little-known to UK travellers, was the most important in Finland for hundreds of years. Now, 200 years after the end of its golden age, it is having a renaissance, with new bars and restaurants opening, and direct flights starting from Luton. My partner and I went for a long weekend, tempted by the riverside setting, its self-styled status as the Finnish food capital – and the 20,000 islands on its doorstep.

Any visit to Turku must start at the River Aura, which flows through it and divides the city into “this side” and “the other side”. On “this side” is the medieval cathedral and several lively boat bars; “the other side” is home to the castle and dozens of restaurants. Car-free boulevards run along both banks of the river, thronged with pedestrians, cyclists and sunbathers (it was a balmy 25C in May). Ten bridges cross the water, and a free ferry, the Föri, has been chugging back and forth since 1903. There’s no old town to hang out in – Turku lost most of its historic buildings in the Great Fire of 1827 – but the flower-filled riverbanks do the job nicely. We rented an electric picnic boat and cruised down to the river’s mouth and back in about an hour (€59 an hour, up to eight people, lanaturku.fi).

Turku prides itself on its food scene. Many of the best restaurants are on the riverfront, but the most highly rated, Kaskis, is a short walk away up one of the city’s seven small hills. It’s worth booking well ahead – we could only get a table for the first sitting, at 4pm. Set four-, five- and six-course menus (€59-€69) come with optional matching wines (€37-€47). The focus is on fresh Nordic flavours, with many ingredients from Finnish forests. The spring menu included pike perch, asparagus, lamb and rhubarb; I especially liked a dish of cabbage topped with shaved reindeer heart. While we ate, we watched a small girl outside practising on her hobby horse, a popular Finnish pastime. 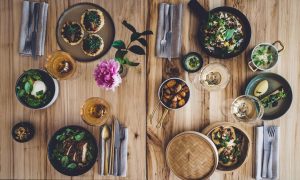 Smör, a cosy restaurant in former vaults by the river, has a similar ethos to Kaskis, serving five- and seven-course tasting menus (€62/€72) with wine flights (€48/€58). We sampled delicate dishes such as trout with mussels, radishes and broad beans but, for pure deliciousness, it was hard to beat a plate of crispy chicken skin. It isn’t all new Nordic fine dining, though. Mami serves a daily-changing home-style lunch menu, including liver on Fridays (mains around €10). Aune is one of the few places to open on Sundays and serves great burgers (meat and veggie, €17). Hügge is a popular vegetarian restaurant, Bassi is a new seafood specialist and Rioni serves Georgian food.

A new foodie district is emerging a 15-minute walk from the centre in the unlikely surroundings of an old prison. Kakola Prison, on top of Kakolanmäki Hill, opened in 1853 and was a notorious spot until its closure in 2007. The vast building stood empty for a decade, but now the team behind Kaskis has opened a restaurant there, Kakolanruusu, serving food cooked over an open fire and designed for sharing, such as lamb chops with burnt aubergine (€28). The restaurant has been joined by the Kakola Brewing Company – which has a terrace and tiny bar, and is building a taproom – and a roastery: Frukt Coffee Roasters. A bakery is opening soon and a hotel and spa is planned for next year. There is also a prison museum, walking tours over the summer, and a free new funicular.

Turku has two universities and about 35,000 students, so there is a lively bar scene. While the boat bars are an institution, and there are fun summer pop-ups, such as the Surf Shack, older drinkers might prefer the historic pubs. The Old Bank has live music on Wednesdays, Fridays and Saturdays; Uusi Apteekki is a bar in a former pharmacy; and Panimoravintola Koulu is a brewpub in a grand old school. Turku’s first rooftop bar, Walo, has just opened on the 10th floor of the Wiklund hotel and is this summer’s hotspot. Bassi has a speakeasy-style club above the restaurant, open on Fridays and Saturdays until 4am. Look out for happy hours – drinking here is expensive. 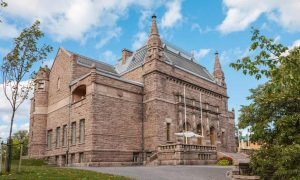 Turku was European capital of culture in 2011 (jointly with Tallinn in Estonia), and has a great range of small museums. We visited the Turku Art Museum, showing mainly Finnish masters; the Sibelius Museum, with an engaging exhibition on the composer’s life and work; the Wäinö Aaltonen Museum, named after the Turku-based sculptor, whose work can also be seen around town; and the Aboa Vetus & Ars Nova, a two-in-one museum displaying contemporary art and archaeological finds. We also strolled to the atmospheric Handicrafts Museum, an open-air museum of original wooden houses in the Luostarinmäki quarter, one of the few areas to survive the fire. Tourists can visit 12 of Turku’s museums over three days with a €38 Museum Walk card (and a bit of stamina).

For shopping, the city has a good selection of vintage clothes shops and design stores such as Kui Design and Terraviiva, which sells gorgeous handmade ceramics. The Market Hall was designed by architect Gustaf Nyström (who also designed the art museum) and opened in 1896; sadly, the huge Market Square is being dug up to allow for a controversial underground car park.

We stayed in the newly reopened Turun Seurahuone hotel, which was designed by another leading architect, Erik Bryggman, in Nordic classicist style in the 1920s. It has been stylishly restored and serves a fantastic buffet breakfast, including salmon, local cheeses and several varieties of rye bread (doubles from £148 B&B, sokoshotels.fi).

The city itself is only one of Turku’s selling points – the other is its archipelago of about 20,000 islands. Many are connected by the circular Archipelago Trail, a 200km network of roads, bridges and free ferries, ideal for a road trip or cycle tour. We spent a day exploring the islands, where many Turku residents have summer cottages. We tucked into a platter of shrimps, herring and salmon at Sattmark in Parainen (Pargas in Swedish; the archipelago is bilingual), then headed to Nauvo/Nagu, a tourist centre that can be reached by bus from Turku. This is a good place to hire bikes or kayaks, and is on the St Olav Waterway, a new pilgrimage route from Turku to Trondheim in Norway.

We took a boat trip around the islands, which are low-lying and thickly forested, with small cabins peeping through the trees. They don’t have the drama of Norway’s fjords, but have a serene beauty. The archipelago gets busy in high summer, but in spring we saw only a few sailing boats and a couple of kayakers. Humans were outnumbered by birds, including a mighty sea eagle. Our destination was Tackork, a berry farm with glass-roofed huts to stay in, and a traditional Finnish smoke sauna. One day wasn’t nearly long enough; I’d happily spend several here, kayaking and wild camping (allowed under Finland’s everyman’s right). 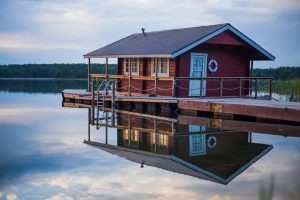 Back in the city, we had a final stroll along the river. Finland’s first capital might not have held the honour for very long – three years later, it was usurped by Helsinki – but it is rightly proud of its past. Judging by all the new openings, its future is pretty bright, too.

Published by “The Guardian “