Today’s interview is with Alexander, a Russian expat living in Finland. Recently, Finland and Helsinki have achieved high rankings in international ratings in education, living standard, and safety. While it is indeed a very good place to live, is it as perfect for expats? What it’s like to live in Helsinki, Finland as an expat? What is the cost of living in Helsinki, or the best places to visit in Helsinki? Let’s find out!

Helsinki is the capital of Finland and the country’s biggest city. It was founded in 1550 on the shore of the Baltic Sea. There is Helsinki city (with population 650k) and Helsinki Metropolitan area, which includes satellite cities: Espoo and Vantaa.

Helsinki is the second smallest (after Brussels) capital of Europe and is the coldest one. It is famous for its closeness to nature and modernity. Also, it attracts tourists with its lakes and islands. There are about 300 islands on the shoreline, and many are connected with bridges. There are eight high-class universities and several technology parts, which brings students and expats.

From an extremely intense preparation in Russia into a calm and quiet life in Finland, I am Alexander – A Russian expat in Finland, and this is my expat story.

I have been living in the Helsinki area for more than five years.  During that time, I came through good, bad, and quite weird experiences, which I would like to share. 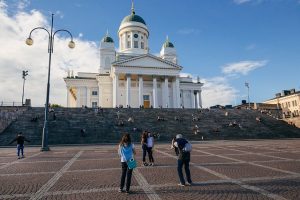 Moving from St. Petersburg to Helsinki

To move from St. Petersburg to Helsinki, I had to do an insane number of things in a short period. I wish I knew how everything would turn out in advance, so I was prepared.

I was sitting at home, slowly exploring career opportunities in Scandinavia, German, and some other countries, when I got a call. A former colleague told me that he recommended me to a company from Finland, and I got the job straight away. That was the start.

It was August 2010 I started working for a Finnish company in Russian office and found out that potentially, I can move to an office in Helsinki. It meant, along with the job and studies, I had to arrange my move in 4 months. I needed to do the following:

Tips for studying in Finland

If you plan your studies in Finland, you should know that most of the programs have fees if you come outside the EU. For this reason, I applied for a job and studies at the same time. In case you have a job and the residence based on employment – you don’t need to pay for studies.

In Russia, there was no Bachelor/Master system when I was leaving. It was a specialist diploma, which is equivalent to a Master’s degree. I have completed 3.5 years of 5.5, which was an equivalent for Bachelor, recognized by Universities of Finland.

Cost of living in Helsinki, Finland

I will try to give some examples to showcase the prices: 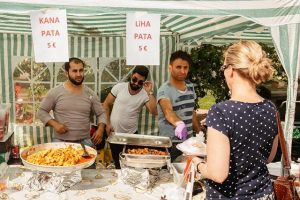 There were no difficulties when I first moved in. The services in Finland worked perfectly. It was very easy to get all the documents and settled down. If you secured a job and place to stay, everything should go fine.

What was complicated – is arranging work and studies at the same time. It was only possible because courses in Universities in Finland are very flexible. You can choose any number of courses, many of which can be done remotely. Although my schedule was very tight, I could choose work hours and timetable for my university depending on my preference.

Discrimination in Helsinki from the locals? Yes or No?

I wouldn’t say there is any discrimination. Finns are somewhat cold, but it is important to understand that it has nothing personal.  They prefer communicating among themselves and are often a bit shy with foreigners.

How to overcome culture shock in Helsinki, Finland?

It was due to general calmness and the lack of communication. When I first came to Finland and saw my flatmate, I said: “Hi, I’m Alex, nice meeting you.” He didn’t pay any attention and just passed by. Later, I was told that it is typical for Finland and you shouldn’t take it personally, and these types of people don’t want to be disturbed.

As I figured out later, there are so many people like them. There was a moment when this brought me down. The solution was simple – avoiding all people who “don’t want to be disturbed.” Now, the majority of people I talk to in Finland are expats and very little Finns. 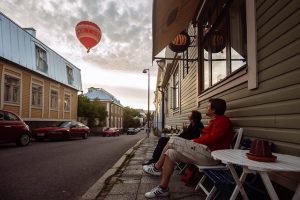 Things I love about Helsinki, Finland

Helsinki is a modern city and very close to nature. It is a capital, with a lot of things to do, and you can live in a rural area with fast connections to everything. I see it as a very comfortable place to build a home.

I like the houses in Finland, from cute wooden houses to modern architecture. Most of them are designed with large panoramic windows to gather all the sunlight, which is rare and precious in this northern area. Apartments have access to the sauna, and new ones have saunas in every flat.

There is a lack of decently priced restaurants. I miss Russia, where many restaurants are open 24/7, and bars are working until the last client leave.  In Finland, at night, there are only fast food restaurants, and most of them are full of drunk people. Bars usually stop letting people in at 3 am.

Also, taxis are expensive, and Uber is forbidden, which I HATE!
Another thing, for me, this place is too calm. I ended up visiting St. Petersburg pretty often to feel myself among friendly people and to spend nights out.

Best things to do in Helsinki, Finland

I like gathering with friends at some cafeterias or some clubs with live music, going to saunas or e nature. It is always a good idea to rent a cottage at a lake.

These are, in my opinion, the best places to go as a tourist as well. In addition to the things listed previously, I would recommend the Ateljee bar, and it has the best view of the city.

I think I have to be honest here. Nordic courtiers have some of the lowest scores when it comes to foreigners making friends with locals. I believe it is true.

I still cannot figure out how Finns make friends. When I ask, they tell that it takes a long time. Some foreigners said they had spent months at (for example) a basketball team together, to start speaking informally. In general, I guess I am too lazy to wait that long. However, I did make friends with some Finns who visit me over the years.

Most of the friends I made are from University, Couchsurfing, Language exchange, and Expat meetings. They are expats or international students.
For language exchange and making friends, I’d recommend Cafe Ligua.

Places to hang out with friends

As I told before, I like bars with live music. You can try Molly Malones, Santa Fe and some bars in Kallio district. In summer, it is common to rent a cottage together, somewhere next to a lake or to go for picnics.

Also, when we want to avoid drunk people at night, we go to café Bahgdad. The owners are from Iraq, where you can smoke hookah and drink tea. There is no alcohol.

There is the expat community, to find the meetups I recommend checking this FB group. Also, you meet them at Couchsurfing and Language exchange meetups, and international students have their gatherings. I would say that the expat community here is really strong.

A memorable experience in Helsinki, Finland

I had some guests from Russia. I needed to visit my University for a short time, so I took them with me. When passing through the student district, we saw a naked man running, and another naked man chasing him and hitting with a wet towel. My friends were shocked, and I did not even pay attraction. If you are out of the sauna, you are allowed to be naked outside.

Changing the perspective about Helsinki after a while

At first, I liked the calm life here. Felt like it is giving me a good rest after all the rush in my home country. Gradually, this peaceful life started to annoy me. At the moment, I cannot imagine staying in Helsinki for a month, without leaving somewhere more fun.

Advice and tips for moving/ living in Helsinki

Getting around with a bicycle is easy, even in winter. I ended up with my driving license expired because it had no need.
The worst weather is in November: Windy, rainy, no sun, and people who endlessly complain about it. You should try to escape the city at around this time and come back when everyone starts getting Christmas mood.

Would you recommend others to live in Helsinki?

Despite all the calmness, this is a great city to live: Good fresh air, clean water, effective public transportation, and a lot of nature around. If that is what you look for, Helsinki is the place for you. I see many expat families with children in the Helsinki area.

What have you learned from living abroad?

If I compare it to Russia, Helsinki is much more international. And since I don’t communicate with locals much, I got to know lots of things from expats. Overall, I think I got a much better picture of what is going on around the world while talking to expats directly.

Finland scored high in many ratings in recent years: The best country to live, the best education system, the 5th happiest country in the world, etc.

Common, no country is so good at everything. In my opinion, Finland is an excellent place for a calm life, but not nearly as perfect as it is pictured, especially if you are an expat.
Don’t let the ratings fool you and don’t put your expectations too high.